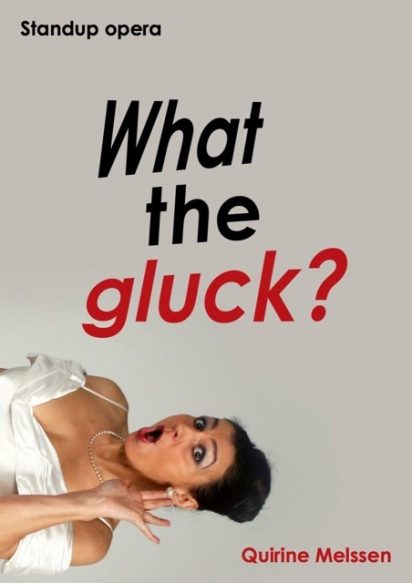 A cross over between Stand-up Comedy and Opera within the show of Stand-up Diva and opera singer Quirine Melssen. In her show “What the Gluck” Stand- up diva Quirine Melssen has an apocalyptic approach, combining opera and stand up comedy. She interacts with her audience, makes them laugh and moves with her outstanding voice.

Never wanted to go to an opera because it takes three hours before they come to the point, it’s expensive and you don’t even understand what the hell they are singing about?

Then: welcome to the world of Quirine Melssen and the standup opera What the gluck?

Here you can feel the spit on your face, coming from a real diva standing right in front of you. Laughing and drinking is allowed and you don’t have to wear a suit.

Classically trained soprano Quirine Melssen brings you an afternoon filled with fast-paced comedy, an unsurpassed High C and – last but not least – some gangster rap.

At the end of the show you have experienced the entire opera “Orfeo ed Euridice” by the composer Christoph Willibald von Gluck; the beautiful music and the story of the guy who was allowed to bring his beloved Euridice back from the dead but was stupid enough to look over his shoulder.

Come along and find out What the gluck? is going on!

Normal tickets for Stand-up Diva What The Gluck: €15,-

It’s also possible to see the show ‘What The Gluck’ at 4 pm and afterwards at 6.30pm have dinner with the diva in Restaurant I-Dock: €39,-

If you have special dietary requirements contact I-Dock Restaurant: 020- 8914891

You can buy your tickets here: